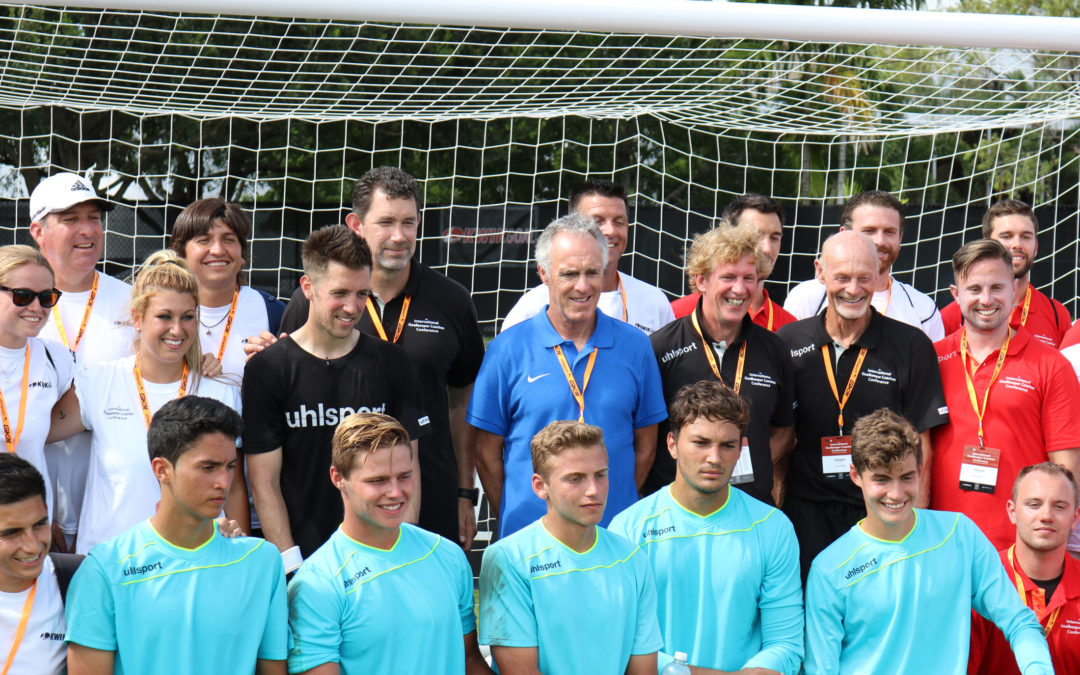 After seeing the enthusiasm and quality of the coaches in attendance at registration, the immediate buzz prior to the first session of the inaugural International Goalkeeper Coaches Conference was understandably exciting.

Having spent the night prior to the #IGCC16 with Christophe Lollichon, I knew that we were all in for a treat. Christophe demonstrated his passion and willingness to discuss goalkeeping over a great meal and explained that he was going to try and share as much as possible with the coaches in attendance.

He didn’t disappoint! His classroom discussion was both humorous and enlightening.  The video concepts of positioning provoked some great discussion and playing the space behind the defense, highlighted on video, became the topic on the field – dealing with 1v1 situations. 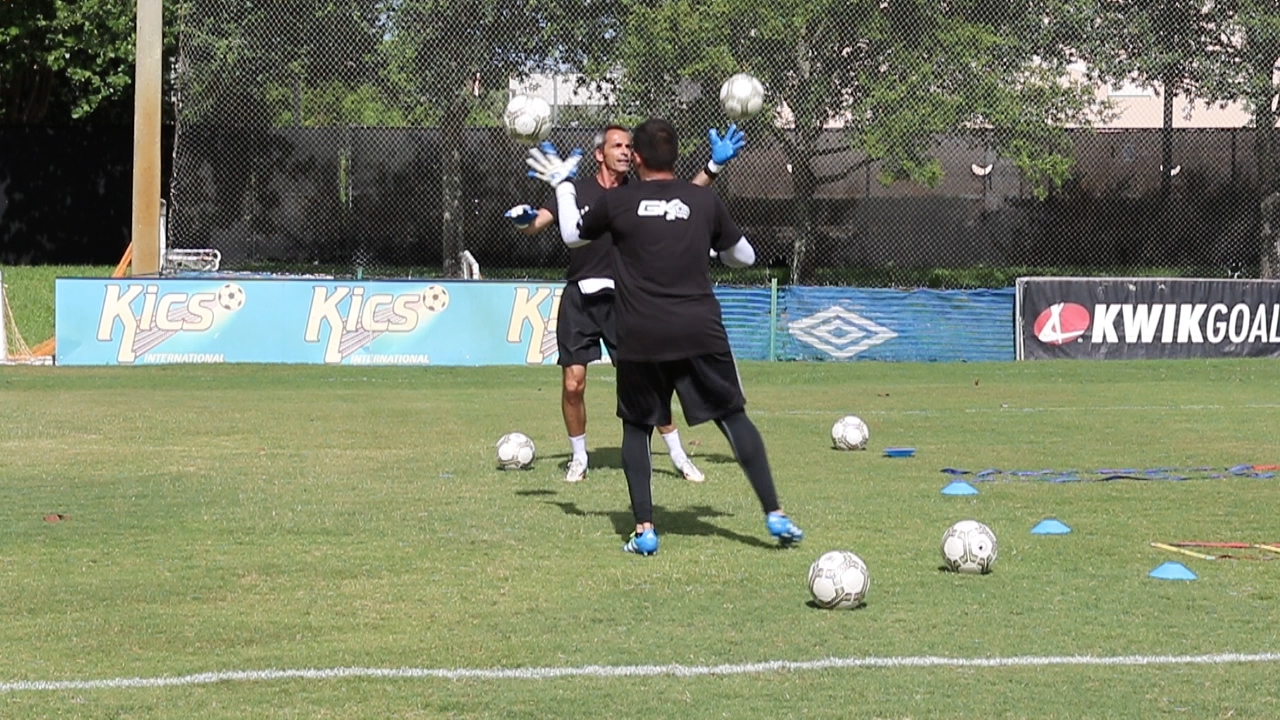 Christophe showed an array of exercises that any coach could use, stressing that you would never put them all in the same session.  His flare for the position was evident and he made me think deeply about different concepts.  I found his choice of goalkeeping terms very interesting and I have used some of his terms myself.  His concepts of advanced positioning were also very interesting and, while the physical dimensions of the goalkeeper and team tactics have to be considered, I had numerous follow up discussions after the session.

Next Up, Maarten Arts from Wadi Degla

After John Cone’s insightful lecture on Movement Dynamics, Maarten Arts kicked off day 2 with a lecture and field session on Scouting Goalkeepers and Identifying talent.  The magnitude of what Maarten does really stood out to me in his lecture.  How do you identify talent quickly in a third world environment?  What a daunting task?!?

I found myself really surprised by Maarten’s tone on the field.  He came across as very stern and direct.  As I stood back and thought about it I recognized that this is the way that Maarten must interact in the challenging environments that he enters.  When you step on the field in a third world country with a huge number of prospective goalkeepers, you have to be commanding and direct.  If you took the time to have discussions with Maarten off of the field, you would see that he was very different.  His session was demanding and combative as he tried to determine which goalkeeper he would select while also challenging us to pick our top choice.  His methods were strict and he knew exactly what he wanted and demanded that from the keepers in training. 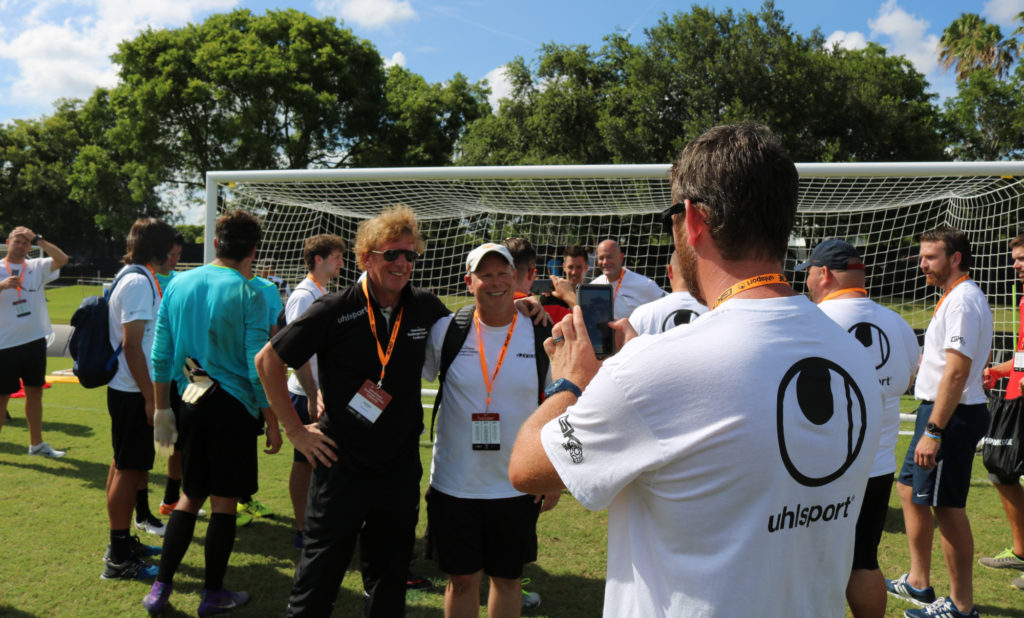 Maarten’s session was an eye opener for me.  Some of the exercises many had seen before, but some had new twists and demanded different things from the keepers.  The evaluation part of the session was great as we all had to choose keepers based on the aspects that we, as coaches, valued.

Before I go on, it has to be said that the best part of the conference for me was watching and recognizing the different philosophies and approaches of each of the presenters.  Agree or disagree, we could all take something from each of these talented coaches.

Andrew Sparkes gave us an indepth look at the club structure and vertical integration of a philosophy at every age level in the Swansea City Academy. 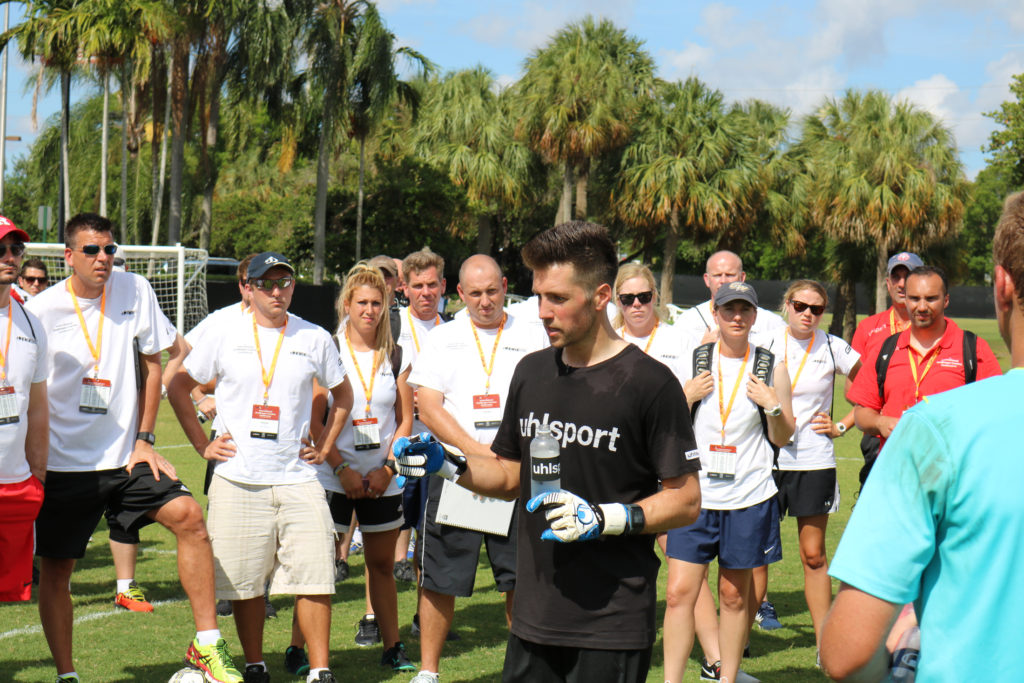 The detail and insight into talent identification, development and the development pathway gave us all food for thought.  Where is that in each of our clubs? 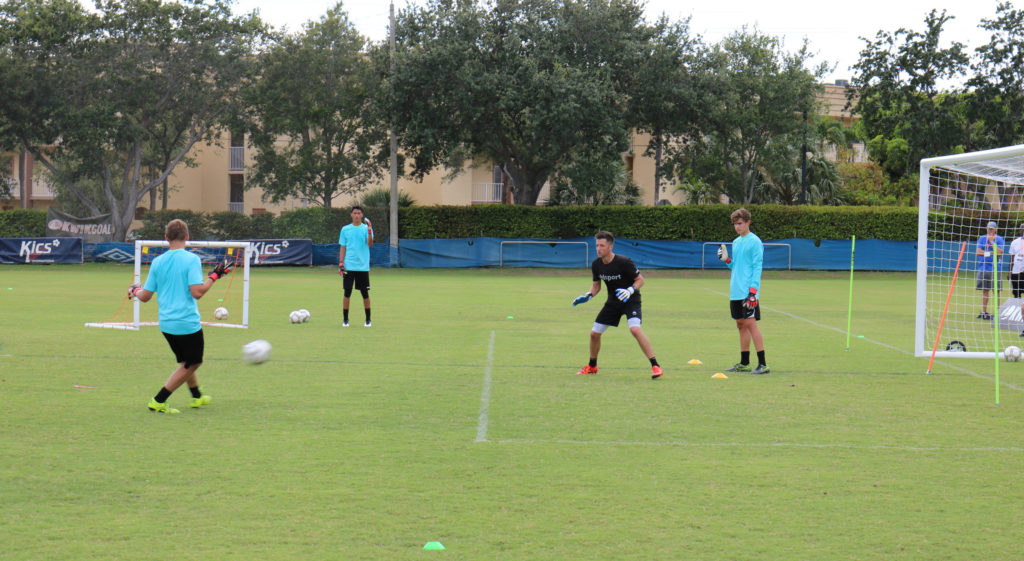 On the field Andrew, gave us some great exercises for developing the footskills and awareness of the goalkeepers.  As a young coach, Andrew exuded confidence and gave great information.  I definitely took some of his exercises and have used them since.

Skipping the obvious assessment of my own session, Eric Steele closed things for us and showed us what being a top class coach is all about.  I have to tell you that Eric was first class in every aspect BEFORE he stepped into the classroom or laced his boots up. 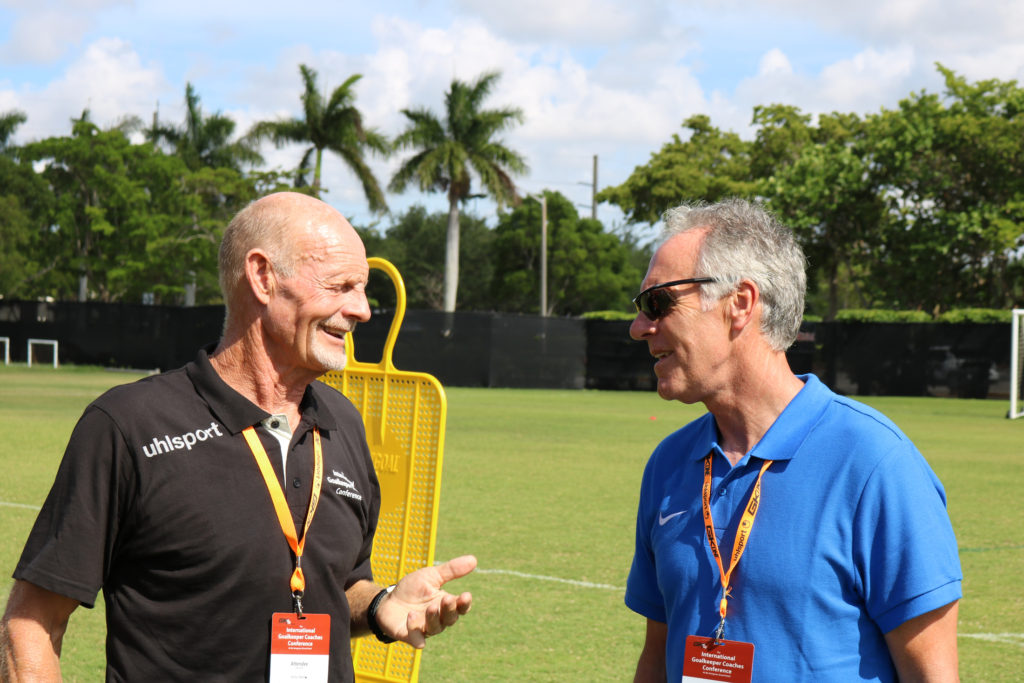 I learned from Eric just by being in his presence.  He was humble, engaging, understanding and accepting despite being one of the top goalkeeper coaches in the world with extensive experiences in the biggest arenas.

In the classroom, Eric was open and honest and listened as much as he spoke – another lesson!  His discussion about positioning and developing the elite keeper was great to see and the footage was something that we would never have been able to see – awesome. 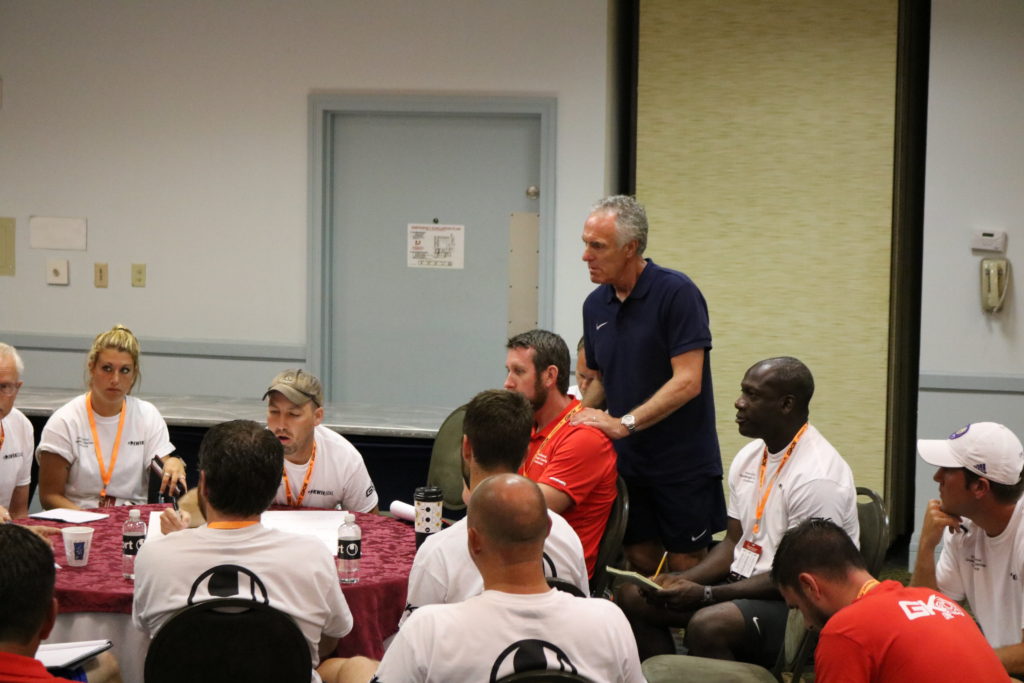 Quick side note: I didn’t know that I was going to help Eric on the field and when he asked if I could serve for him, I was like a kid in a candy store. 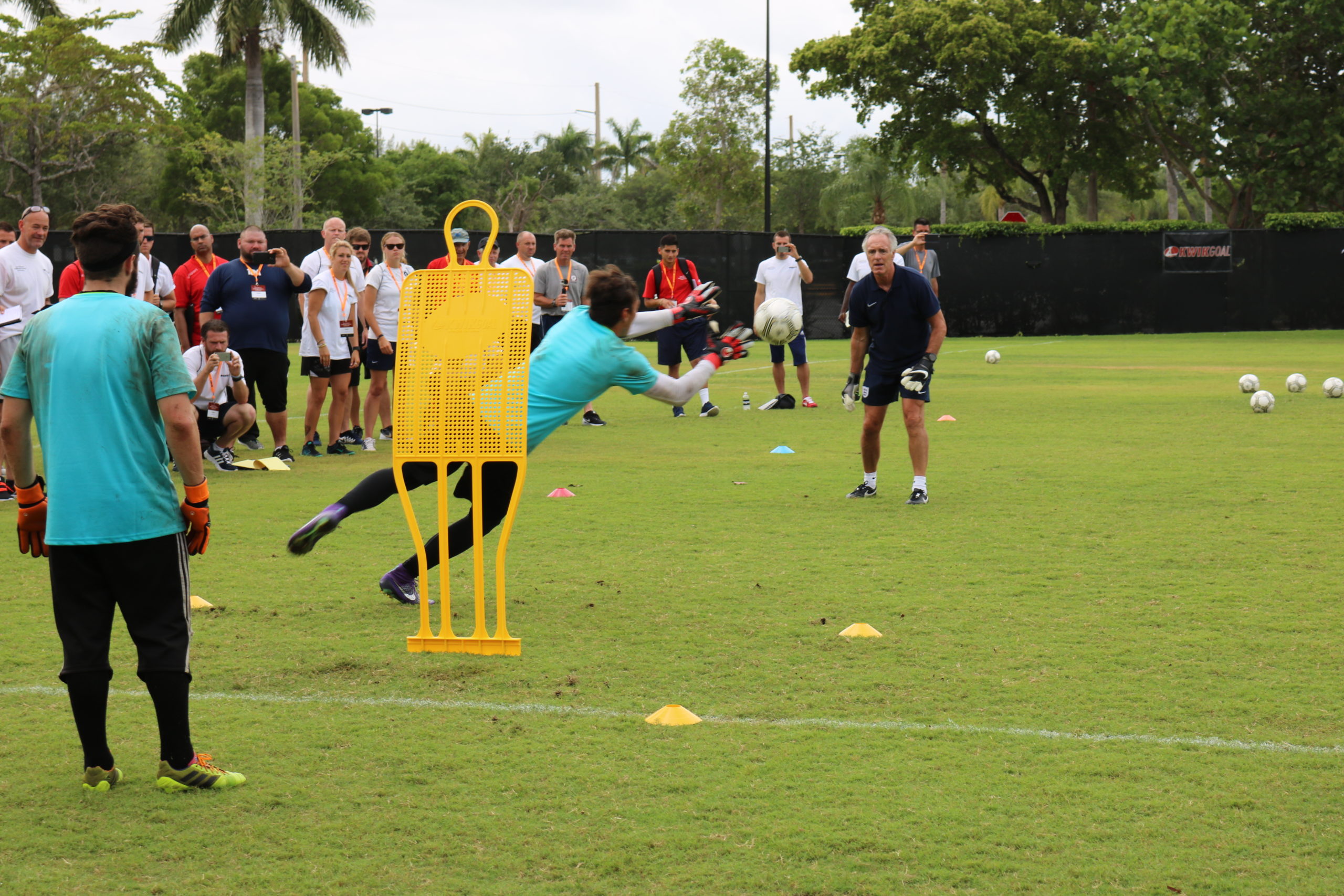 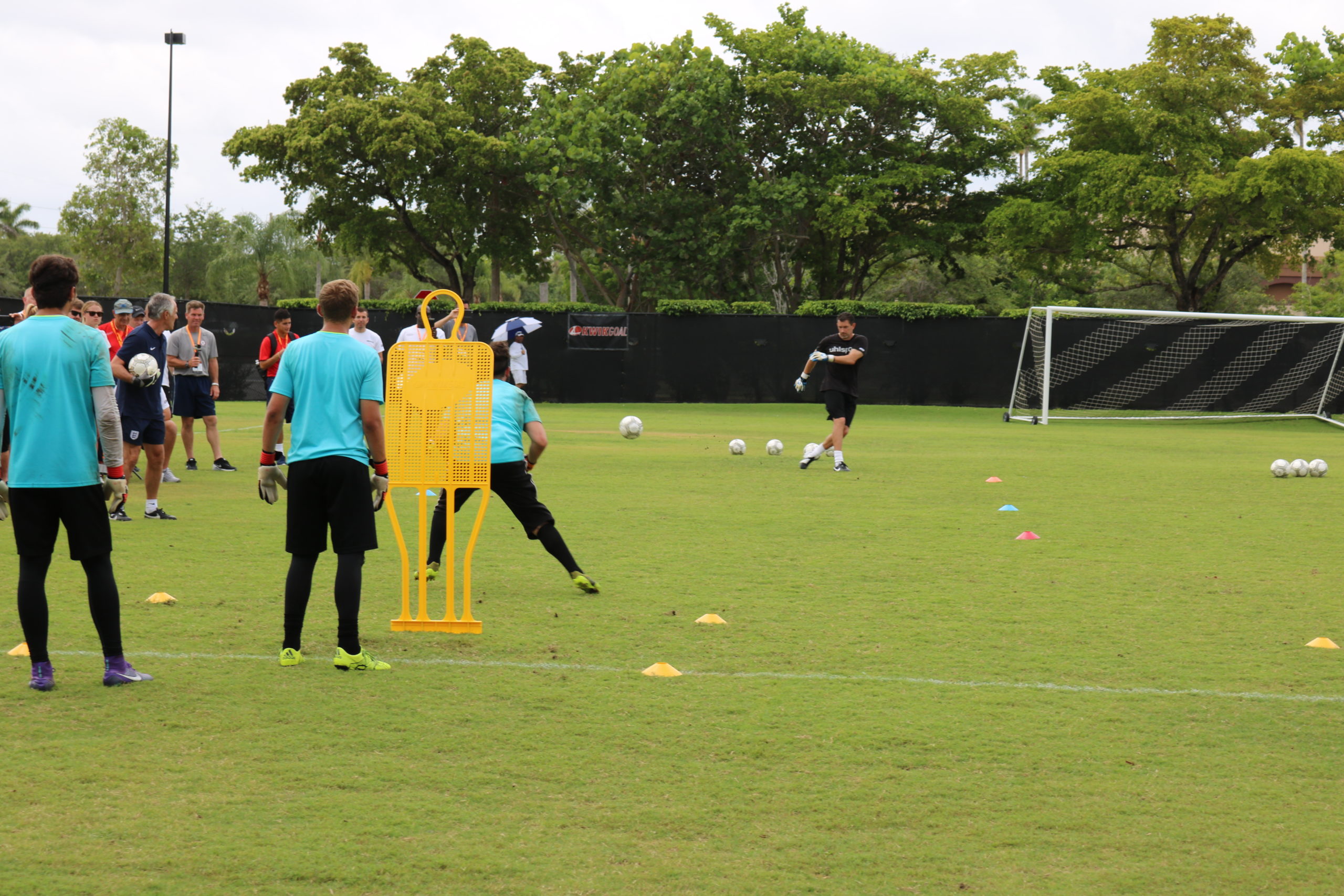 Eric’s session was a great mixture of handling, shotstopping and distribution.  His personality and charisma on the field was great to see and kept everyone involved.

Not only did I take away new ideas for sessions and exercises, more importantly I learned lessons about presentation and professionalism.

To sum up the weekend: it surpassed all of my expectations.  The presenters were chosen based on their quality and experience and I couldn’t have asked for a better line up for the first IGCC.

Those in attendance were awesome and having such a great group of coaches in from all over the US and beyond was really what made the experience so special.  Everyone came with an open mind and left with a unique appreciation for different methods and philosophies, new exercises and new friends in goalkeeping.

I am excited that the dates for the #IGCC17 are confirmed and the line of presenters already looks like a great follow up the this year’s.